The Power Of Humility 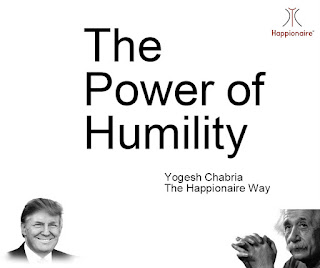 "Show me someone with no ego and I’ll show you a big loser.” – Donald Trump

What answers did you get? Based on your answers and behavior, you will know what your true beliefs are and these will have a big impact on your life, relationships, career, happiness and the way people around you treat you.

Over the years, I have observed how people and organizations with humility have succeeded immensely and those with an ego eventually suffer huge setbacks.

I remember, when my first book, Invest The Happionaire Way, had been released I was looking for the most innovative ways to increase sales as I wanted it to be the #1 Bestseller.

One of my ideas was to sell it in-flight as millions of people fly every day and would like something to read. I contacted the CEOs of a few major airlines and also met them. I was 23 at the time.

The established players, who met me, were not open to the idea of selling books on the plane. They believed, as it had never been done before, people wouldn’t be interested. Even though this meant revenues for them, they said it can’t be done because “That is not how things are done here.”

On the other hand, a new low cost carrier that had recently started loved the idea as it meant more revenues. We signed a deal and sold tons of books.

Today almost ten years later, when I look at these airlines I can see the power of humility.
One of the airlines that was not humble and open to new ideas went bust; the other lost most of its market share and has been facing heavy losses over the years.

On the other hand, the airline that was open to new ideas today has steadily grown its market share and is extremely profitable.

The difference between humility and ego is billions of dollars. A culture of humility needs to be incorporated in every organization as this is what differentiates those who succeed and those who don’t. The rewards are immense. I speak from experience.

Are you and your organization investing in programs where the habit of humility is inculcated?

I would love to hear your views with complete humility!

Indeed the power of humility is immense....and I wish more organisations realize this...

I agree with Trump! Only losers hav no ego!!!! Like you!

I loved this story and jack - learn to respect. This is not a place to bring your "We Love Trump" ideas.

I think Jack didn't probably read the whole article. This has nothing to do with politics but a way of life and thinking process. Really somthing more people should learn because when we are humble and ger rid of the ego we can learn so much more and truly succeed and be happy. Loved the simple way you have sahred this in Yogesh ji.

Dear Yogesh,
I find Your article "The Power of Humility " in Happionaire is like a catalyst that sparks the mind to realize,that there is no power stronger then the power of knowledge ,which develops your determination in achieving your goals that is when u shun your Ego and caress knowledge u are driven towards the power of positive thinking. Moral of your story is that Ego is like excess baggage that grounds u and knowledge takes u to heights that over come all turbulence I ones life !
Cheers ! For inspiring me with your article ! Akbar khan

One of the best pieces I have read Yogesh and I was among the people who had purchased your book on one of those flights ........it had a huge impact and since then I have watched how you have changed the way people think.with the happionaire way...

A truly impactful piece. It goes beyond being an article, but infact the way life should be approached. Cheers!

Dear Yogesh,
Ego is a v.big drawback and brings our downfall.ofcourse one has to keep their selfrespect intact.But having humility, is a blessing and can open all doors in life .