The Power of Audacious Goals 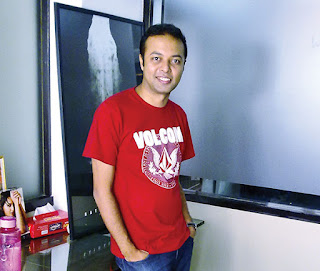 “What makes you think you can do that?”

These are just some of the things you might have heard from elders. Luckily, a few of us don’t pay attention to them and follow our instincts. I love meeting people from every field who are high performers; from sports and entertainment to business, robotics, science and the military; learning from them and sharing the principles of success with people all over the world through The Happionaire Way motivational seminars, books, videos and training programs.

Imagine if I told you that a boy from Shillong, belonging to a regular middle class family would go on to impact the lives of some of the biggest Bollywood Stars today like Ranbir Kapoor and Deepika Padukone, would you believe it? That this person would create several jobs and become a leader and master in his domain?

What if I told you this young boy was almost about to go down a different path and waste his life away because of following his school Principal’s advice? And how watching a movie had a lasting impact on his life and consequently the lives of countless others?

What was the secret that made this boy so successful?

I recently had the pleasure of meeting Anirban Blah, the founder of Kwan, one of India’s biggest celebrity management company’s. In fact, Anirban told me that in terms of size, they are bigger than their number 2, 3 and 4 competitors combined!

But it did not start out this way and I dug deeper to find out the patterns and strategies that brought in this incredible success. I believe that the best way to succeed is to understand and replicate success patterns of people who have already succeeded.

The first thing I noticed when I met Anirban was that he had a huge poster of the movie Jerry Maguire, signed by Tom Cruise, Renée Zellweger and others from the movie.

He later told me that this was the movie that changed his life and inspired him to kick-start his celebrity management business. And that is why he decided to call his company Kwan, a word from the movie, which mean love, respect and money.

Imagine how different his life would have been had he not watched movies?

Born in Shilong, his parents worked in SBI (State Bank of India), far away from the limelight and glamour of movies. He moved to Delhi at the age of 15 to pursue better opportunities and grow.

At school, since he was a bright student, his Principal discouraged him from taking up Liberal Arts (which is not something ‘smart’ people take, according to his Principal) and coaxed him into taking either Commerce or Science instead. Anirban gave in and instead of pursuing his passion, ended up obeying the Principal – a terrible choice to have made.

Having no passion for what he was studying, he quickly lost interest and soon stopped doing well in studies, got into terrible company, started rebelling and almost ended up wasting his entire life.

Luckily, some time later, something snapped inside him and the little voice in his heart grew stronger and stronger, giving him the courage to do what he always wanted to do – pursue Arts, his real passion.

And of course he got back to being the bright, wonderful lad that he always was – he started doing well in studies again and eventually landed a job in Sweden.

He was doing great for himself and imagined that the next step up the ladder would be working at Goldman Sachs. But his dream job would just have been a waste of his talent – or so he was told by his boss.

Luckily for him his boss intervened like a divine messenger and made him realize how the most brilliant people in the world made choices that had an impact. These words changed the course of his journey.

Anirban got thinking, quit his job in Sweden and returned to India to join Globosport, started by Mahesh Bhupathi.

He took a huge pay cut and couldn’t even afford coffee at the fancy coffee shops where his friends would hang out, who were making several times more at other larger companies.

This is where he cut his teeth and grew the celebrity management business, something of a dream job ever since watching Jerry Maguire! He told me how he didn’t care about the money initially as all he wanted was to learn, grow his network and skills.

As he grew the business, he started getting offers with higher salaries from others in the business, but he continued with Globosport – until he had a difference of opinion and decided to move out.

At that stage, all he had were some audacious goals to make a huge impact and become one of the most powerful celebrity management companies in India.

He was married, had twins and barely any money in his bank account. What do you think happened? He went out, took action and achieved all the audacious goals he had set for himself. And he did all of this in barely 7 years.

He shared a lot more and some of his new goals, which I will be sharing in the near future!

A few powerful learnings for success:

1.     Have super audacious goals and ask yourself – How can I make it happen?

2.     Read – Anirban is a voracious reader. For example, I was surprised how much he knew about Iran, when I told him I grew up there. When you read, you get wonderful insights and knowledge that you otherwise might not be exposed to. The people on the top are always well read and well informed.

3.     Don’t obey anyone else’s rules – make your own rules. To move ahead in life, you can’t listen to people around you – unless what they are saying is helpful. Anirban realized this after following the advice of his Principal who discouraged him for pursuing his passion and being miserable as a result.

4.     In the beginning, always focus on growing your skills, learning and network. This will automatically bring in financial benefits.

5.    Take action and remember that nobody has the right to tell you what you can or can’t do!

Go ahead, make your own audacious goals and start achieving them by taking immediate action!

Yogesh Chabria is a world-renowned leader in the field of human potential. He is a #1 bestselling author, motivational speaker, entrepreneur and founder of The Happionaire Way. His seminars, books, articles and video programs have influenced people from over 100 countries. It is his vision to have a world filled with happionaires. To be a part of this vision, visit: www.happionaire.com

Yogesh, I really was inspired after reading this about Anirban. Keep sharing more such motivational stories and inspiring!

Super inspiring! Never had heard about Anirban and kwan before It is amazing what a moive can do to change a life.

Yogesh Chabria - I thank you for always sharing something so incredible and different!

Thanks for sharing this Yogesh! Truly inspiring.

I could connect with each and every word of this article as all of this is something I firmly believe in now.. learnt it the hard way though..

Nice to know and read about Anirban!

Thank you,
Wishing you all the very best,
Kind Regards,
Shradha

I used to work at KWAN and Anirban has been a true inspiration!

All ur stories and post are motivational.thanks for sharing

Thank you for sharing these motivational stories.it moves something inside..